In that hour Jesus rejoiced in spirit, and said, I thank thee, O Father, Lord of heaven and earth, that thou hast hid these things from the wise and prudent, and hast revealed them unto babes: even so, Father; for so it seemed good in thy sight. – Luke 10:21 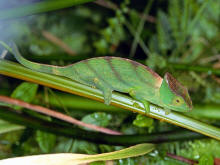 Prop: a picture of a chameleon

Summary: We should be selfless in spreading the gospel to win others to Christ.

Look at this picture of a chameleon. This reptile is a scaly lizard that is able to change the color of its skin to blend in with its surroundings. Today’s lesson is about the apostle Paul and how he became as others to share the good news of the Lord Jesus with them.

The apostle Paul knew something about human behavior: people like people that are like themselves. Even in modern salesmanship, salespeople are taught to watch the person they are attempting to sell and become a mirror of the way the person is sitting and speaking to be more likable to that person. So if the prospect (the person the salesperson is attempting to sell) speaks softly, the salesperson speaks softly. If the prospect leans forward, the salesperson leans forward. All of this is to become more likable because people will buy from people they like.

The apostle Paul talked to many different people about Jesus. He decided he would make himself as a servant, or slave, to everyone he met. He did this so they would listen to him when he told them about Jesus. So to the Jews, he spoke about the law and how Jesus came to fulfill the law; to those who did not understand the laws of Moses, he spoke in a way they could understand what God needed them to know about Jesus. To those that were weak, he became as one who was weak so they could relate to what he was telling them about Jesus. He was like a chameleon, able to blend in, to everyone he met. He did all of this so that some would be saved by hearing the good news of Jesus Christ.

Paul knew he had a reward that would last forever in heaven for doing the task he had been given. Although he had a right to be paid as a preacher, he did not ask to be paid. He spread the good news free of charge. He loved to tell others about the Lord Jesus. He viewed his reward as the people who became Christians from hearing the good news. He became a slave to all in order to win some to Jesus.

Paul gives us a great example to follow. It is not about us. It is all about Jesus. We should take ourselves out of the way and let God use us to tell others about the Lord Jesus. Not everyone we tell will believe, but then that is not our task. Our task is to tell, and leave it up to Jesus to save them.

Let us pray. Dear Lord Jesus, give me the desire to tell others about you. Amen.