My testimony titled Healed by Jesus is my story of being healed from cancer. Jesus can heal anything because with God all things are possible (Matthew 19:26). Who I am is not important. Knowing Jesus as your Lord and Savior is important. My name is Jim Kerlin. This site began in February 1997 and Jesus continues to bless it. 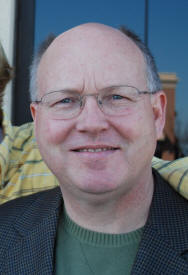 When my son was young, I started to help at church to give the children’s sermons. When I started looking it was hard to find ideas for children’s sermons that were current. Most of the resources I found were over forty years old. I decided to include my children’s sermons on my personal website because others might find them useful. Later I registered the domain name ChildrenSermons.com and moved them to that site.

There are many pastors, youth pastors, Christian workers, Sunday School teachers, parents, and grandparents that use the site as a source for ideas. I have a certain respect for anyone who takes on the challenge of doing the children’s sermon. It’s hard enough to have the courage to speak in front of the whole church, much less try to keep the attention of small children. That’s the tricky part: trying to tell about spiritual truths in a concrete way to kids with a 30-second attention span. I learned early on not to ask too many rhetorical questions. If you ask a question, they will answer (usually with brutal honesty to the chagrin of a nearby parent). I know this from experience.

My hope is that whether you agree with every word I say or not, that your creativity will be sparked. Take an idea and run with it. And I know how little you are probably thanked for doing what you do. So let me encourage you: don’t give up! The Lord will bless you if you pray about it and give the sermon from your heart. Remember, you are helping to shape the character and lives of the children. You are helping the world to be a better place. What you are doing does make a difference. You may never know who may be hearing God speak to them through you until you meet them in heaven. May the Lord Jesus bless you as you minister to the children.