When I consider how my light is spent
Ere half my days in this dark world and wide,
And that one talent which is death to hide
Lodg’d with me useless, though my soul more bent 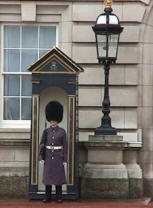 To serve therewith my Maker, and present
My true account, lest he returning chide,
“Doth God exact day-labour, light denied?”
I fondly ask. But Patience, to prevent
That murmur, soon replies: “God doth not need
Either man’s work or his own gifts: who best
Bear his mild yoke, they serve him best. His state
Is kingly; thousands at his bidding speed
And post o’er land and ocean without rest:
They also serve who only stand and wait.”
— poet John Milton, On His Blindness, a sonnet from Poems, 1673.
Image Copyright 1998 Jonathan Eoyang. Used by permission.

Prop: A picture of guard or soldier standing on watch.

Summary: The first disciples that Jesus called were ready to serve. They dropped everything and followed him.

Look at this picture I brought today. (Show prop.) This is a guard in front of Buckingham Palace in London, England. This guard does not have to actively defend what he is protecting right now. He is on watch duty. He is ready to serve if the situation demands action. Today I want to tell you about some of the people that Jesus called to follow him as he began his earthly ministry. They were ready to serve also.

Several verses in the Bible tell us how Jesus called his disciples (followers) and who they were. Simon and Andrew were brothers and fishermen. James and John were brothers and fishermen as well. Let’s read about them. (Read Mark 1:16-20.) Wow! The Bible says when Jesus called these men they dropped everything and followed him immediately. They left their fishing nets and family members because they were ready to serve.

When Jesus said to Levi (Matthew) the tax collector, Follow me, he got an immediate response. Levi walked off the job to follow him (see Luke 5:27-28). Let’s read about another disciple. (Read John 1:43-45.) When Jesus called Philip the first thing Philip did was tell a friend that he had found the one Moses and the prophets had written about, the Messiah. He was excited and ready to serve because he knew he was following God’s Son, Jesus.

What a great example we have from these first disciples, which were later called apostles. They were ready to serve. Are you? Sooner or later you will be called to serve God. We all get called, but not everyone answers God’s call to service. Are you like that when your parents ask you to do a chore around the house? Do you act like you didn’t hear them tell you to pick up your room or take out the trash? When you are young and learning to obey your parents, they are helping you get ready to serve God one day. They are teaching you the importance of responsibility, duty, and service to others. People that serve God do not think of it as a chore, but a wonderful privilege. I hope you will be ready to serve God one day.