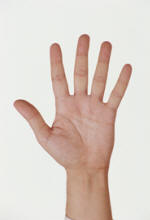 Summary: Jesus is the Prophet spoken of by Moses. We should always tell the truth.

How many of you have learned to count to ten? [Show your hands.) Okay, tell me how many fingers I have? [Ten.) Are you sure? Let me count them for you. [Hold up left hand, start lifting fingers one at a time.) One, two, three, four, five. [Hold up right hand, continue lifting fingers one at a time, but count backwards from ten.) Ten, nine, eight, seven, six. Six plus five equals eleven (6+5=11), so I have eleven fingers! [Of course, the children will argue this point.) Alright, I am joking. I really only have ten fingers. Simply telling you I have eleven fingers does not make it true.

Today I want to talk about telling the truth. How can we tell if what we hear is the truth or not? The Bible helps us with this. A long time ago God gave Moses the ten commandments. Then one day God told Moses something else that was very important. (Read Deut. 18:15,18-22.) God told Moses he would send a very special Prophet from among the Hebrew people. A prophet is a person who speaks what God tells him to say.

Moses said that what this Prophet would say was so important that God would hold us responsible if we did not listen to what that Prophet said. Moses said that if a prophet spoke the truth, then whatever he said would happen. If a prophet did not tell the truth, then whatever he said would not happen. Merely saying it would happen would not make it true. That is how we can tell whether or not a prophet speaks truthfully.

Jesus always spoke the truth. (Read John 5:39,46.) Jesus said he was the Prophet that Moses had written about. How do we know for sure? Because everything Jesus ever said would happen has come true. Other people have claimed to be the Prophet spoken of by Moses, but what they said did not come true. Jesus said he would be killed and then rise again, and he did! So we know without a doubt he is the one spoken of by Moses. Jesus spoke what God the Father told him to say and it was always the truth. We should try to follow the example Jesus gave us and always tell the truth.

Let us pray. Dear Lord Jesus, help me to be like you and always tell the truth. Amen.