Peter confessed that he believed Jesus was the Son of God.

How many of you know the Pledge of Allegiance? Here in America we stand to recite it at the beginning of the school day. When we make a pledge we are promising to do something. When we pledge our allegiance we promise to stand up for something no matter what it may cost us. To be willing to do that we must really believe in the truth of what we are standing up for. Many patriots gave their lives (the ultimate sacrifice) for what the United States flag stands for. As we near our celebration of Independence Day (July 4), it reminds me of the time Peter stood up for Jesus. Some people only remember that Peter denied Jesus. I want to tell you about the time Peter pledged allegiance to Jesus. 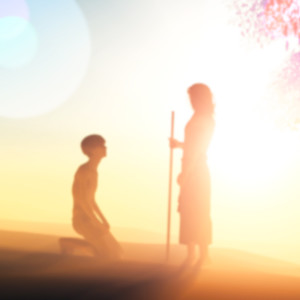 Peter stood up to pledge allegiance to Jesus. He believed Jesus was the Son of God, the Christ (or anointed One). Jesus said that God the Father had revealed this to Peter. God the Father shows who Jesus is to each of us. If we believe that Jesus was a holy man only, then we never accept his sacrifice on the cross for our sins. If we believe he is the only Son of God, then we can believe on Him as our Savior. As we pause to thank God for our freedom and our many blessings on this Independence Day, let’s remember how important it is to confess Jesus as our Savior.