Prop: a poster of a European castle

Summary: Jesus is preparing a place for us in God’s house.

Have you ever seen a mansion? A mansion is a really big house. It has a lot of rooms in it. I have a picture of Elvis Presley’s Graceland in Memphis, Tennessee. We went on a tour of it through all the rooms, including the Jungle Room where Lisa Marie played as a child. Another mansion I have seen is the Vanderbilt’s Biltmore Estate in Asheville, North Carolina. That mansion has 250 rooms in it! Today I want to talk to you about the only place in the Bible where the word “mansions” is used.

In my Father’s house are many mansions: if it were not so, I would have told you. I go to prepare a place for you. And if I go and prepare a place for you, I will come again, and receive you unto myself; that where I am, there ye may be also. And whither I go ye know, and the way ye know. Thomas saith unto him, Lord, we know not whither thou goest; and how can we know the way? Jesus saith unto him, I am the way, the truth, and the life: no man cometh unto the Father, but by me. 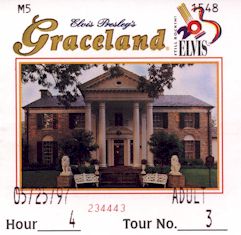 The word mansion means “abiding places” or rooms. Jesus was saying his Father’s house had lots of rooms. It is a mansion! There is even more good news. Jesus is preparing a room just for us! He wants us to be with him in heaven. He will come again and personally receive us into heaven one day. He wants us to know that he is God’s chosen way to heaven.

Some people think there are many ways to heaven. Some folks think if they are good and never do anything really bad that they will go to heaven. Other folks think if they follow the teachings of Buddha, Mohammed, or Krishna (prophets of other religions) that they will go to heaven. But these folks are wrong. Jesus said he was the only way to heaven. …no man cometh unto the Father, but by me. (John 14:6) We must accept Jesus as our Savior to go to heaven. It’s that simple. The next time you see a really big house or mansion, remember that God wants to build a special room in his house just for you so you can live with him forever.