Summary: This sermon uses a piece of rope to explain the Trinity. 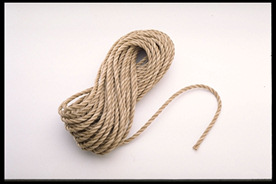 Prop: a piece of rope with three cords or some twine

Look what I brought with me today. Do you know what it is? [rope] Rope is made of more than one piece of thread. The rope is stronger when the cords are woven in and out among each other. It would not be as strong if it was simply one straight piece. This piece of rope has three cords. Today I want to explain how our God is a trinity.
The word trinity means three in one or threefold. Consider this rope. It has three cords, each equal, separate, but forming one rope. That is how we can try to understand the Trinity of God the Father, Jesus, and the Holy Spirit. They are all three persons of the one true God.

In Deuteronomy 6:4 the Bible says Hear, O Israel: The Lord our God is one Lord. At first glance you would think this means there is only one true God. That is correct. There is only one God and all other gods are fakes. There is more to this verse than that. The words for God are used three times (Lord = Jehovah, our God = Elohim, Lord = Jehovah). So even in this verse we are given a clue about the Trinity.

Jesus taught us about the Trinity. Listen to these verses. (Read John 14:11,16] Jesus said that he and the Father were one. He also said that he would send the Holy Spirit once he returned to heaven. He also commanded us in Matthew 28:19 Go ye therefore, and teach all nations, baptizing them in the name of the Father, and of the Son, and of the Holy Ghost. Jesus clearly taught us that all three persons made up the one true God.

The Trinity is not an easy thing for us to understand. So I hope the example of the rope will help you understand how three things are united in one.