Joke: A little girl was reciting the Lord’s Prayer, and said “Forgive us our trash passers, as we forgive those that pass trash again to us.” 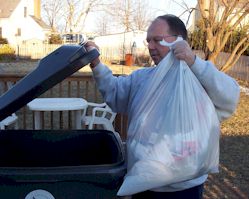 Prop: a few empty trash bags (or one filled with paper only)

Summary: Jesus cast out unclean spirits. He took the trash out of people. Jesus can help us clean up our lives.

Do you help around the house by doing chores? (Listen to responses.) When I was young I would help take out the trash. I would use trash bags like these (show bags) to collect all the garbage in the house and take it outside. The trash bags would be very messy and smelly on the inside, but you could not tell it from the outside of the bag. What would happen if we never took out the trash? (Listen to responses.) We would live in filth and become miserable and grouchy. Sometimes people have trash on the inside in their minds and souls. Today I want to tell you how Jesus helps people like that.

(Read Mark 1:23,39.) Jesus did what I’m sure you would do. He helped them! He cast out the unclean spirits. He took the trash out of them. He wanted them to have a clean spirit on the inside.