Summary: Jesus is the way to heaven. 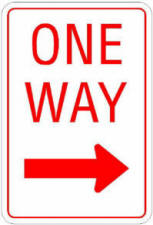 Look what I brought with me today. It is a highway map. If you are going on a trip, you need to know how to get there. If you were traveling from one city to another, a highway map would come in handy. You could look at the map, and decide the best roads to travel. If you are going from, say, Raleigh to Charlotte, there are several roads you could take. Each way would get you there. One might be a scenic route, and take longer. Another route on the interstate might be faster.

Did you know that many people do not know how to get to heaven? Unlike traveling from one city to another, there is only one way to heaven. It is from having a personal relationship with Jesus Christ. The disciples were listening to Jesus tell them that he was going to return to heaven and prepare a place there for them. Jesus said he would return and take them there with him. He let them know that he wanted them to be with him when they died on earth. When a person who trusts in Jesus as Lord dies, the spirit leaves the body and goes to be with Jesus in paradise. Jesus said to the believing thief next to him on the cross, To day shalt thou be with me in paradise. (Luke 23:43) Jesus told the disciples that they knew where he was going and the way to get there.

But poor doubting Thomas was puzzled. He said to Jesus Lord, we know not whither thou goest; and how can we know the way? He didn’t know where Jesus was going or how to get there.

Jesus told them that he was the only way to the Father in heaven. He stated plainly that he was the way, the truth, and the life. As God’s only Son, Jesus has been given power and authority over all of his creation. He is the true God. He gives life to all of us. When Jesus declared that no man cometh unto the Father, but by me he made it plain that there was only one way to heaven and he was it. Many false religions in the world today claim to be the way to heaven. It isn’t Mohammed or any other great prophet that holds the keys to heaven. Jesus is the only way.

On your next trip or vacation, when your mother or father looks at the highway map, remember this lesson today. Jesus is the way to heaven.