Summary: You are told to share God’s love and forgiveness with everyone, including your enemies. 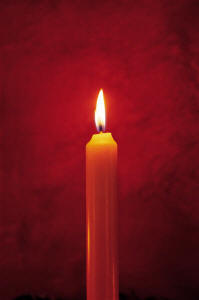 Most of us do not use large candles unless the power goes off in our homes during thunderstorms. Many years ago, before the common use of electrical lighting in homes, people used candles at night. (Show the candle.) Candles give light to dark places. Today let’s listen to what Jesus said about that.

Jesus was speaking on a mountainside one day, helping people understand how to behave and treat one another. He spoke about love and forgiveness mostly. To forgive means you let go of any feelings of being hurt. Jesus even said we should love our enemies, the people that hate us.

After you experience God’s love and forgiveness, you understand something that many people do not know. Jesus told us to share that with everyone, including our enemies.

Jesus used a couple of examples. One was that a city on a hill could be seen for miles (Jerusalem was a city on a hill.). Another was lighting a candle so it could give light in a room, and not hiding the light under a basket. Jesus explained that your understanding was a “light” in your heart — it took away the “darkness” of not feeling how wonderful God’s love is. Now that you know, let it glow. Or as Jesus said, “let your light so shine” to others that they would see how well you treated others and give thanks and praise to God for being blessed with that understanding.

Let us pray. Dear Lord Jesus, thank you for your love. Let the light of your love shine from my heart today. Amen.