Prop: Four quarters and a one dollar bill (or coin for bill exchange in any currency)

Summary: We get what we give. Jesus teaches us to be kind to others without giving “pay back.” 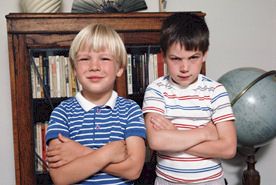 Today I want to talk to you about how to show mercy. Look what I have in my hands [the coins and bill]. Did you know four quarters is the same as a dollar? It is. I have a story to tell you.

Once there were two boys in first grade named John and Matt. Matt helped the teacher at lunch by taking up lunch money. The lunches cost half a dollar (US). John came to pay and gave Matt a dollar bill. Matt was in a hurry and didn’t realize he gave John only one quarter for change. “Hey, wait a minute,” John said, “You owe me another quarter. That dollar is the same as four of those quarters. Since lunch is half a dollar, you owe me twenty-five cents more!”

“I did give you two quarters. Now move along,” Matt said. “No, not until I get my money, you thief!” shouted John, who was getting very angry. “Is this how you get your money? Do you take it from others?” John shouted louder. This upset Matt and he shoved John down backwards. “I’ll give you some pay back! I didn’t take your money!” Matt screamed back. The teacher ran over to separate the boys who were now pushing each other around.

“What’s going on here?” asked Ms. Brown, the teacher. She listened to the two boys explain what happened. “Maybe Matt meant to give you two quarters, John, and only gave you one by mistake. Matt, give John another quarter. John, I’m surprised at you. Do you really think Matt would try to take your money? I think he wants to be your friend more than getting a quarter. Now you two shake hands and say you’re sorry.”

Jesus wants us to learn to show mercy. That means we should not be quick to judge others, but we should be kind to others. Sometimes we are mistaken. Even if we are right, we can be a better person when we show a little kindness instead of giving “pay back.” Jesus said Blessed are the merciful, for they shall obtain mercy. (Matthew 5:7) Here’s what else he said.

Matt made a mistake, but John was quick to judge Matt’s action as wrong. John thought Matt was trying to take his money. The shouting got louder and soon they were fighting. You usually get what you give. In this case, John expected to get a 50-cent lunch and two quarters for his dollar. When he accused Matt of taking his money, he got into a fight instead. Matt pushed John, and John pushed back. We can see in this story what Jesus was talking about when he said with what measure ye mete, it shall be measured to you again. If John had kept his cool, and asked the teacher for help, the whole argument could have been settled quietly.

As you play with others or go to school, remember to be full of mercy. Try not to be quick to judge another person. Let’s be kind to others.