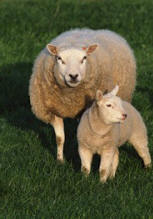 Props: a picture of a lamb

Summary: God tested Abraham’s faith when he told him to offer his only son as a burnt offering. Abraham did not withhold his son and passed the test. Do we have something we hold more dearly than God? We need to offer our “Isaac” to God to be in a right relationship with Him.

How many of you have ever seen a lamb? They are very gentle animals and they have woolly coats that we use to make soft clothes. A long time ago, people would use these innocent lambs for a sacrifice to God. When they killed the lamb, the lamb would be burned on an altar to God to take away their sins.

Abraham was a great man of faith. God tested Abraham by telling him to sacrifice his only son as a burnt offering. Abraham had to travel three days to the land of Moriah to the place God told him to go. This area was the same place where Jerusalem is today. It was as if God was asking Abraham to do something he would do himself when Jesus became the Lamb of God at Golgotha many years later. Where Abraham’s offering would only cover his sins, Jesus’ death was to cover the sins of everyone who ever lived and trusted in him.

Abraham was attentive to God’s call. Many times when God would call his name, Abraham would answer “Here I am.” Are we listening for God’s voice speaking to our hearts? When Isaac and Abraham came near to the place for the sacrifice, Isaac asked him where was the lamb for the sacrifice? He didn’t realize that Abraham was planning to use him for the lamb. Abraham answered him in faith: “God will provide himself a lamb.” When Abraham took the knife to slay Isaac, the angel of the Lord called to Abraham and prevented him. God realized that Abraham was obedient, even to the point of being willing to sacrifice his only son. Abraham had the faith to believe that if it was God’s will for him to take the life of Isaac, God also had the power to raise him from the dead.

God blessed Abraham for being obedient. He said he would “multiply thy seed as the stars of the heaven, and as the sand which is upon the sea shore.” (verse 17) This meant that Abraham would be blessed with many descendants. Are we willing to offer our “Isaac”? Are we willing to give to God the one thing we cherish most? For us to be in a right relationship with God, we must be willing to put Him first above all else. We can thank God that he was willing to give his only son, our Savior Jesus, as the one sacrifice for the sins of the whole world.

Adapted from “Giving Up Your Isaac” as told by Rev. Lewis Shaffer, Son Shine Ministries International Inc. Used by permission.