Joke: A Sunday school teacher asked her class why Joseph and Mary took Jesus with them to Jerusalem. A small child replied: “They couldn’t get a baby sitter.”

Prop: a poster of Jesus in the Temple

Summary: The story of Jesus being left behind in Jerusalem shows that his parents observed the feasts and took him to worship services. Jesus gives children an example to obey your parents. 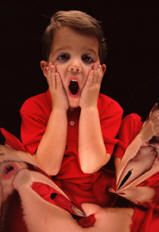 How many of you have ever seen the movie titled Home Alone? [show of hands] Well did you know the idea for that movie is in the Bible? It is recorded in the Gospel of Luke, Chapter 2 about Jesus. Here is how it happened.

It is important for a Jewish male to go to Jerusalem for three feasts every year, one of which is the Passover. This is a remarkable feast which celebrates the deliverance of the Israelites from slavery in Egypt. When Jesus was twelve years old, Mary and Joseph took him to Jerusalem for the feast. Now they must have gone with friends from Nazareth where they lived because after the feast was over, they somehow missed counting Jesus among the group. They traveled one day’s journey away from Jerusalem when Mary realized he was missing. She may have sat up and put her hands to her face and said “Jesus!” [make a face like they did in the movie]

Mary and Joseph spent the next three days going back over their steps to find Jesus. They were worried sick about what may have happened to him. They must have searched everywhere. Finally, they found him in the temple. Jesus had spent time listening to and asking questions of the temple teachers, which were called doctors. They were quite impressed with his understanding of the scriptures and the answers he gave. His mother was upset and wanted to know why he did not realize how much they had worried about him. Jesus replied, How is it that ye sought me? wist ye not that I must be about my Father’s business?

Mary and Joseph did not understand what Jesus said. Like any parent, they worried over a lost child. He did not feel lost but was at home in the temple where the Father God was worshipped. The Bible says that Jesus left with them to return to Nazareth and obeyed them. Jesus was an example for all children to obey your parents. I hope you will always let your parents know where you are so you will not be lost and or left home alone.