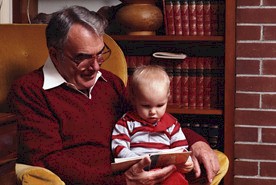 Summary: You are safe in God’s hand. Jesus will never let you go. Jesus is one with God the Father.

Today I want to talk about trusting Jesus to hold you. Did you know that Jesus loves you very much? Let’s read about it.

(Read John 10:27-30.) Jesus spoke of his followers as being his sheep. Now that Jesus is back in heaven we do not see him like we see our parents or our family members. Jesus loves you so much he wants you to live forever with him. He wants you to trust him like you trust your father and mother. You are in good hands with your parents because they love you very much. But someone loves you even more than that… Jesus! You are in God’s hand when you trust Jesus as your Savior. God’s hands are steady and sure, safe and sound. Jesus will always hold on to you and will never let anyone or anything separate you from his love. He is always watching over you.

Let us pray. Dear Lord Jesus, thank you for loving me and keeping me safe. Amen.